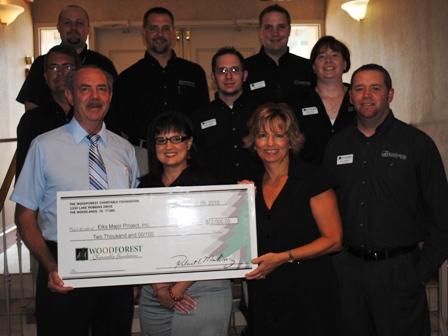 The Elks Major Project is a camp organized and sponsored by The West Virginia Elks Association for individuals who are mentally and/or physically challenged.   The individuals who attend camp typically do not have the opportunity to participate in this type of experience.   The special attention provided to campers as they engage in normal activities provides new exposures that often cannot be experienced at home or school.

The West Virginia Elks Major Project is committed to providing an environment where the campers can enjoy a week of learning, fun and meeting new friends. When surveyed, parents overwhelmingly stated that their child came home stronger mentally and physically, and more enhanced socially.  There is never a charge to campers or their families.

“The Woodforest Charitable Foundation and Woodforest Bank are pleased to make a donation to Elks Major Project,” expressed Kim Marling, Executive Director & Vice President of Woodforest Charitable Foundation. “All children deserve the opportunity to attend camp. Elks Major Project makes it possible for people with disabilities to bond with others and feel accepted.  This is an extremely honorable organization and we are delighted to support their work.”

The Woodforest Charitable Foundation was created by Woodforest National Bank in 2005 as a direct result of its desire to support and invest in the communities in which it serves.  The Foundation is creating a legacy of commitment to those in need, enriching lives and communities through dedicated leadership and faithful administration by providing funding to qualifying 501(c)(3) charities.  For additional information regarding The Woodforest Charitable Foundation, call 832-375-CARE (2273) or visit the Foundation’s website at www.woodforestcharitablefoundation.org.
Celebrating 30 years of service and ranked among the top earning banks in the United States, the Woodforest family of banks currently has assets of approximately $3.2 billion and services more than 850,000 customers with branches in excess of 750 throughout seventeen states:  Texas, Alabama, Florida, Georgia, Illinois, Indiana, Kentucky, Louisiana, Maryland, Mississippi, New York, North Carolina, Ohio, Pennsylvania, South Carolina, Virginia and West Virginia.  For information about Woodforest National Bank, please call 832-375-2000 or visit the bank’s website at www.woodforest.com.