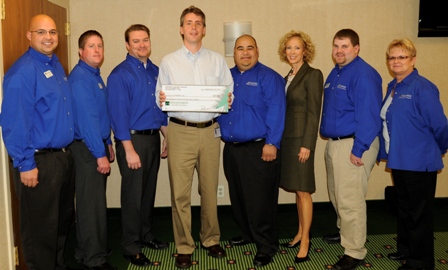 Many children in Foodlink’s service area are enrolled in the free and reduced lunch program.  But when school is closed during weekends and holidays many of those children go hungry.  In response, Foodlink established its Kids Café and BackPack Programs in effort to eliminate childhood hunger in central and western New York.

The BackPack Program targets elementary school children in areas where there are high percentages of eligibility and children at risk of chronic hunger.  Each child receives a weekly backpack filled with child-friendly, easy to prepare non-perishable food on Fridays to take home for the weekend.  The Kids Café Program was established to provide healthy meals for children in a safe after school environment.  Foodlink provides meals to 1,500 children every weekday during the school year at 35 Kids Café sites.  Kids Café programs also offer a safe place, where under the supervision of trustworthy staff, a child can get involved in educational, recreational and social activities that draw on existing community programs and often include family members.

Foodlink is the Feeding America regional food bank, which rescues and redistributes over 11 million pounds of food annually to a network of 450 member agencies in a 10-county area.

The Woodforest Charitable Foundation was created by Woodforest National Bank in 2005 as a direct result of its desire to support and invest in the communities in which it serves.  The Foundation is creating a legacy of commitment to those in need, enriching lives and communities through dedicated leadership and faithful administration by providing funding to qualifying 501(c)(3) charities.  For additional information regarding The Woodforest Charitable Foundation, call (832) 375-CARE (2273) or visit the Foundation’s website at www.woodforestcharitablefoundation.org.