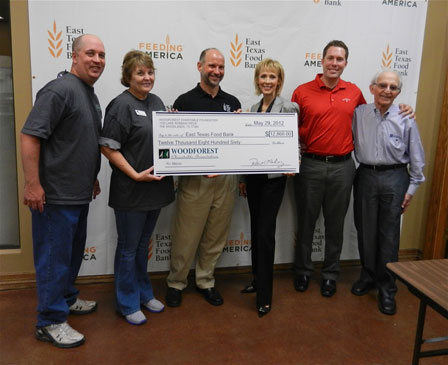 (Tyler, Texas) June 12, 2012 – The Woodforest Charitable Foundation presented a check to the East Texas Food Bank for $12,860 to support the BackPack Program, Senior Servings and emergency food assistance. The funds will be equally distributed to support efforts in Bowie, Cass, Gregg, Harrison, Henderson, Rusk, Shelby, Smith, Titus and Van Zandt counties to provide nutritious meals to children and seniors who are at risk of hunger.

"We are truly grateful to the Woodforest Charitable Foundation for their passion to support the communities in which they serve," said Dennis Cullinane, executive director of the East Texas Food Bank. "It's heartwarming to know that we have such devoted donors of money, time and resources in our fight against hunger in East Texas."