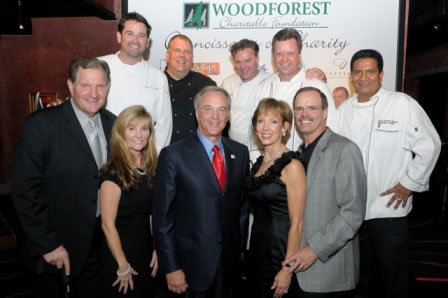 THE WOODLANDS, TX (January, 2010)  Serving the needs of others was definitely on the menu when five top-rated celebrity chefs worked their magic to make the third annual “Connoisseurs for Charity” another outstanding fundraising success for Woodforest Charitable Foundation.

Held last fall at Amerigo’s grille in The Woodlands, which restaurateurs Casey and Nancy Kosh closed to the public to accommodate the by-invitation-only event, the intimate gala was considered as one of the most unique local fundraising venues of the year.
Over 136 guests were tantalized by the presentations of five delicious courses each personally created by one of the famous chefs and paired with a fine wine, resulting in an amazing culinary extravaganza.

The creative experience brought together a stellar team of top-ranked celebrity chefs in the state and country representing fine restaurants from the Houston and The Woodlands area.  They included:

The ambiance became even livelier when the energetic emcee Ralph McIngvale stepped up on stage to launch the live auction of first-class packages, leading several philanthropists to open their hearts and vie for the exciting catches.
Among the highly-coveted and luxurious live auction items were:

But perhaps the most coveted live auction item was a private dinner for 40 prepared by all five chefs in the winning bidder’s home.

“We were deeply touched and grateful for the commitment and generosity of the guests, the celebrity chefs, and all who helped make our Connoisseurs for Charity event another amazing success,” said Kim Marling, Executive Director of Woodforest Charitable Foundation.  “Especially in today’s economy, it is more important than ever before to support our local charities that do so much for those who are in need."

Robert Marling, President of the Woodforest Charitable Foundation, added, “We truly appreciate what was achieved at this year’s gala. We not only thank the support that was returned from these outstanding chefs and our humanitarian guests, but we are also thankful for the support from our friends, customers, vendors, and employees of Woodforest National Bank.  By coming together, the Woodforest Charitable Foundation is able to enrich the lives of those in need within our communities.”

Unique to this fundraiser, the Foundation and Woodforest National Bank underwrote the expense of the dinner event and the administrative costs, allowing for 100 percent of the evening’s ticket sales to directly benefit charity.  Through “Charity Selection” cards placed at each place setting, the Foundation offered guests the opportunity to direct their contribution to one of the evening’s pre-selected charities, which included Boys & Girls Country, Interfaith of The Woodlands, Montgomery County Women's Center, Montgomery County Youth Services, Texas New Community Alliance (New Danville), The Community Clinic, and The Friendship Center.