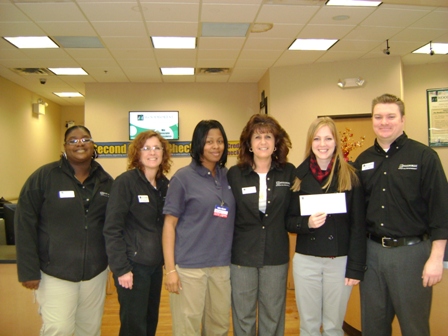 The Kids Café is a national program that fights childhood hunger and the consequences of poor nutrition.  Woodforest Charitable Foundation’s recent grant of $600 will help Foodlink, Inc. continue its mission of alleviating hunger throughout the community.

Foodlink is a regional food bank that rescues and redistributes nearly 10 million pounds of food annually to a network of 500 member agencies in a 10 county area.  Foodlink’s mission is to empower at-risk communities by providing food, nutrition, education and resources in Central and Western New York.  Through the redirection of scarce resources to programs that meet the emotional, physical and spiritual needs of clients, the food bank is able to help non-profit agencies save vital dollars on their food budget.

Foodlink is also a proud supporter of the Kids Café program.  The Kids Cafe program was established to provide healthy meals for underserved children in a safe after school environment.  The Café works to lessen the impact of hunger by offering a hot nutritious dinner from a menu that relies on fresh fruits and vegetables, many of which come from Foodlink's own Freshwise Farms.  Currently, Foodlink provides meals for 1,500 children every weekday at its 45 Kids Café sites.  In addition to food, Foodlink’s Kids Café’s provide fun and educational services that focus on nutrition, fitness and cultural activities with the goal of developing healthy lifestyles at an early age.