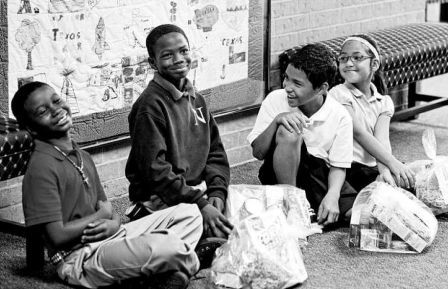 HOUSTON, TX - On September 1, representatives of the Woodforest Charitable Foundation and the Houston Food Bank visited Nitsch Elementary School in support of the Backpack Buddy Club. This club is a program of the Houston Food Bank. It provides food on Fridays that children at Nitsch and 230 other schools in the Houston area take home for weekend nourishment. Food is distributed at Nitsch with parental approval in a discreet manner to avoid inviting unwanted attention.

David Chaney, the director of corporate and foundation giving for the food bank, pointed out that by providing food for children, the food bank also promotes academic achievement. As he explained, “We know that if children get healthy meals, they will be more successful in school.”

Ms. Kim Marling who is vice president of the foundation explained why the foundation supports the Backpack Buddy Club when she said, “We firmly believe that no child should have to say, ‘It’s not my turn to eat today.’”

Principal Carol James said, “I speak for the Nitsch community when I say thank you to the Houston Food Bank and the Woodforest Charitable Foundation. You make such a difference for our students. Our school is stronger academically because we are able to give children weekend nourishment through the Backpack Buddy Club.”

The Woodforest Charitable Foundation was created by Woodforest National Bank in 2005 as a direct result of its desire to support and invest in the communities in which it serves.  The Foundation is creating a legacy of commitment to those in need, enriching lives and communities through dedicated leadership and faithful administration by providing funding to qualifying 501(c)(3) charities.  For additional information regarding The Woodforest Charitable Foundation, call 832-375-CARE (2273) or visit the Foundation’s website at www.woodforestcharitablefoundation.org.