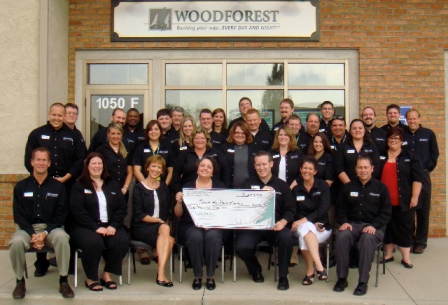 With Ohio’s unemployment rates hitting a new high at 9.5 percent, hundreds of thousands of residents may be at risk of hunger (Bureau of Labor Statistics).  Woodforest Charitable Foundation’s recent contribution will help support Over-The-Rhine’s mission of alleviating hunger in their community.

The Over-The-Rhine Kitchen, which was founded in 1976, is the oldest operation of its kind in Cincinnati. It began when Father Tom Bokenkotter, seeing that 80% of the residents in the Over-The-Rhine neighborhood were living below the poverty level, recruited a group of volunteers.  With just $700 in the bank, they started serving warm meals in a building on Main Street.  In 2003, the operation was moved to its current location on Vine Street, where a hot meal is served five days each week.

The Kitchen continues to be a welcoming and positive place that serves over 81,560 meals per year to the poor and homeless in the area.  “We salute Woodforest National Bank’s employees for not turning their back on the sad realities of life; the working poor, the homeless, the elderly poor and the mentally ill.  It is our goal to continue to provide a safe and welcoming environment where individuals and families will be served a daily hot meal and receive groceries on a monthly basis.  We deeply appreciate receiving the donation of $3,000 from the Woodforest Charitable Foundation,” said Patricia Wakim, Executive Director of Over-The-Rhine Kitchen.  “Thank you for walking with us in our mission to care for those less fortunate.”

For more information about Over-The-Rhine Kitchen, please call (513) 241-5121 or visit the Kitchen’s website at www.overtherhinekitchen.org.