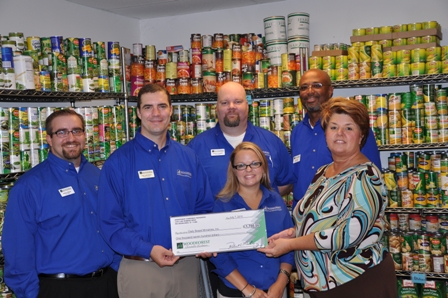 The Greer Soup Kitchen, a part of Daily Bread Ministries, is a non-profit, charitable organization that was founded in 1990 when concerned citizens observed that people in their own town were going hungry.  The Soup Kitchen began in a run-down storefront in downtown Greer.  One meal was served on the first day.  Today over one hundred and fifty meals per day are served in a modern restaurant-style facility.

The Kitchen strives to serve struggling families, the poor, the homeless and the addicted by ministering to the whole person.  It is the Kitchen’s hope that their clients and the community will be able to recognize the love of Christ through their actions. “Woodforest Charitable Foundation’s contribution helps make it possible for us to provide at least one hot nutritious meal per day to the hungry men, women and children in our area,” said Genia Hughes-Carr, Director of Daily Bread Ministries ­– The Greer Soup Kitchen.  “On behalf of Daily Bread Ministries – The Greer Soup Kitchen, I would like to thank you for your generous donation and support.”