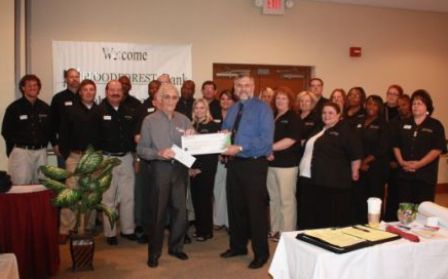 The Food Bank of North Alabama is a regionally based organization proactively committed to finding a solution to help end hunger and poverty in an 11-county region.  Since 1985, the Food Bank has been responsible for providing direct food bank support to more than 200 charitable feeding programs in northern Alabama.  “We deeply appreciate Woodforest Charitable Foundation’s altruistic support of our community effort to keep food moving to the people who need it most,” said Richard Hartz, Agency Coordinator, Food Bank of North Alabama.  “Every dollar donated to our Food Bank procures over 7 pounds of food.  The Foundation’s generous donation will allow us to provide food for almost 10,000 meals.”

For more information about the Food Bank of North Alabama, please call (256) 539-2256, send an e-mail to dhiatt@hiwaay.net or visit www.alfoodbanks.org.

The Woodforest Charitable Foundation was created by Woodforest National Bank in 2005 as a direct result of its desire to support and invest in the communities in which it serves.  The Foundation is creating a legacy of commitment to those in need, enriching lives and communities through dedicated leadership and faithful administration by providing funding to qualifying 501(c)(3) charities. For additional information regarding The Woodforest Charitable Foundation, call (832) 375-CARE (2273) or visit the Foundation’s website at www.woodforestcharitablefoundation.org.