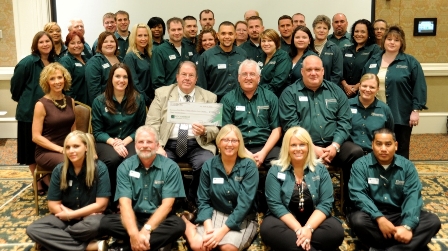 Sadly, hunger remains a serious problem in central and eastern North Carolina.  Almost half a million people in the Food Bank's 34 county service area struggle each day.  Over 163,000 of these people are children.  In an effort to eliminate childhood hunger the Woodforest Charitable Foundation directed its contribution to the Food Bank’s Kids Café and BackPack programs.

Established in 1980, the Food Bank of Central & Eastern North Carolina is a non-profit organization that provides food to people at risk of hunger in central and eastern North Carolina. In 2009, the Food Bank distributed over 36.8 million pounds of food through 800 partner agencies including soup kitchens, food pantries, shelters, and after school programs for children.

The Food Bank of Central & Eastern North Carolina works with elementary and middle schools to provide food for children over the weekend through its BackPack program.  This program is placed at schools where 80% or more of the students are eligible for free and reduced-cost meals.  The Program allows children to bring home nutritious food when other resources are not available, such as on the weekends or during school vacations.  Backpacks are filled with child-friendly, non-perishable, and vitamin fortified food, as well as educational activities.

The Food Bank also fights against childhood hunger by supporting its 25 Kids Café program sites.  Kids Café programs provide free meals and snacks to low-income children through a variety of existing community locations such as after school programs and churches.  In addition to providing meals to hungry kids, Kids Café programs offer a safe place, where under the supervision of trustworthy staff, a child can get involved in educational, recreational and social activities.
For more information about the Food Bank of Central & Eastern North Carolina, please call (919) 875-0707, visit www.foodbankcenc.org or e-mail info@foodbankcenc.org.