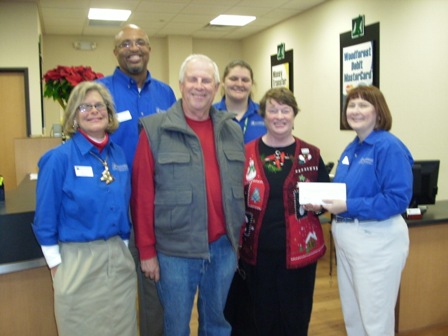 Hunger in America is a monumental problem.  Currently, there are nearly six million senior citizens in the United States facing the threat of hunger.  Woodforest Charitable Foundation's recent donation to Union County Meals on Wheels will help support their mission of delivering hot meals to citizens in need.

Union County Meals on Wheels is a volunteer organization whose purpose is to deliver meals, five days a week, to home-bound senior citizens and people with disabilities. Meals on Wheels’ assistance afford individuals the opportunity to live independently in their own homes, with dignity and self-respect.  All donated meals are carefully monitored for food safety and nutrition standards.  Diabetic, low sodium and other meal plans are available for clients with special nutritional needs.  In addition to providing nutrition to sustain the health of a client, a meal delivery by a Meals on Wheels driver or volunteer also serves as a safety check and a source of companionship for the client.  “Our group of volunteers delivers between 100 and 120 hot meals five days a week to those who are unable to prepare or obtain meals for themselves,” said Trudy White, Board Member of Union County Meals on Wheels.  “Woodforest Charitable Foundation’s gift alone will underwrite almost 163 meals for people in need.  Although your bank is new to our area, you opt to join in immediately with local charities and concerns, and we are grateful you chose us to be a beneficiary of your generosity.”